Summary – This was a rather wet day. We started by visiting the lake, although after driving around most of it found the nature reserve part was closed. We spent the rest of the afternoon in the nearby local town looking over the river; walking through the town, buying local wine, visiting churches and the castle.

The Lake
The weather was dreadful! It was so wet and cold. We tried to go to a Lake which had a little nature reserve. It took a while to find the entrance after driving around most of it, and we did it was closed. Turned out it closed at 2pm on a Sunday and we got there at 3pm.

The view from our balcony as we left

Assisi as we drove past in the rain

A view of the Lake 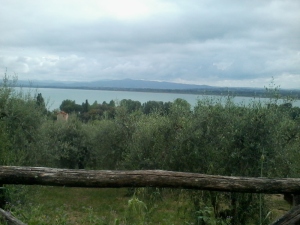 Another view from further up the hill

Lunch
We had lunch by the lake. Obviously we stayed in the car though as the weather was still cold and wet. Although there was still a nice view despite the weather.

The view from where we stopped for Lunch

Another view from the same place 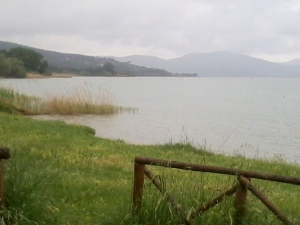 Arriving in Castiglione del Lago
This was a little town by the lake. We parked at the bottom of the hill and have a lots of steps to get to the top. I don’t think Mum was too impressed with it though.

The view of the town from where we parked the car 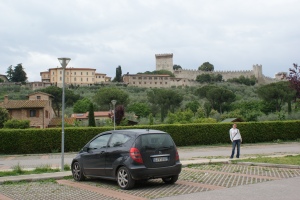 The steps up to the car

The gatehouse leading into the town

Me and Dad at the map; trying not to pose 😉 hehe

The Town
We walked around the town with all the little shops. We went into a few little churches too. They reminded me a lot of the ones in Lisbon.
We also bought a local bottle of wine. We got a 10% discount from the lady as we pasted the first time. We wanted to get something produced locally. Even better there were several samples before buying it.

A Square in the Town 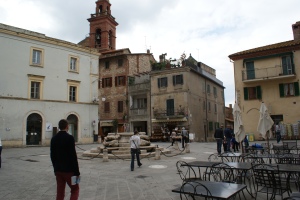 One of the Churches 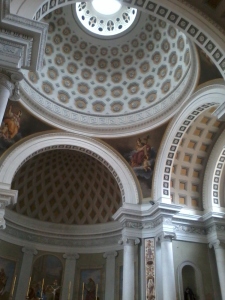 Inside in a Different Church

Tom’s ‘New Bag’; actually Mum’s but made me laugh

The View Point
At one end of the town there was a another gatehouse leading out to a view point. If looked out a long way over the lake and you could see very clearly the old roman road leading to the town.

A view across, including the Roman Road

The View Across the Lake

The Castle (and Museum)
The entrance to the castle was via a museum. As well a few bits and pieces there were a lots of kites. Interesting as we arrived there appeared to be a kite festival of some kind. The building itself was interesting; covered in paintings on walls and ceilings.
Then leading to the Castle was a long narrow tunnel. The castle itself had a few turrets and other than that only a few walls around the edge. The centre appeared to be a kind of theatre, with a cafe. We stopped by the cafe on the way out for an ice-cream, despite the weather.

The walls and ceilings of the museum

The Tunnel to the Castle 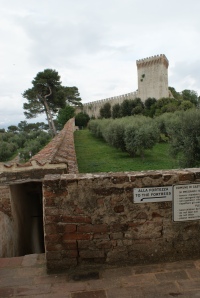 The walls of the castle

Quite a few more photos from the castle and museum – link