Introduction: This was Laura’s first full day, started local and went to into Southampton Centre via the Common. Walking past the shopping centres and the Bargate, as well as walking on the old City walls down to the docks. Then with my Dad visited Romsey, and went to the pub. We also attempted a walk in the New Forrest… which didn’t go too well and ended up scaring Laura with old churches and with deep, dark forrests.

Walking to town and lunch

We had a very lazy morning and didn’t leave the house until about 11am. The plan of the day was to walk to town. I decided that walking down Hill Lane would be very boring, so walked through the Southampton Common (basically a large park). For lunch we went to Subways and ate in the park next to the Civic Centre.

From the park we walked down the high street and walked past the 2 main shopping centres: West Quay and The Marlands. We went past the Bargate, which is old entrance to the city, and the council use as their logo. We then did the historical side and walked around the old city walls of the city to the old pier and old TitanicMuseum. I had heard a rumour it was closed and had moved, which is true, it had moved to the Civic Centre which is where we actually started the day.

We then walked back via what we call ‘below bar’ as it is just south of the Bargate. We walked past the Medieval House and the Tudor house. We also went past the old ruined churched which was bombed in the Second World War and not restored. It is now a memorial to sailors, as it was a church the sailors used before they left. I think personally it should be a memorial to the bombings in general in Southampton as there are still signs of it all over the city. This is new though as until only a few years ago the church was covered in weeds, and fenced off completely, now it is paved and open to the public.

On the way back we called by the Titanic Museum and walked through West Quay shopping centre (and Waterstones because I wanted Laura to get Fifty Shades), just to find the Titanic Museum was closed and we would have to come back another day. Probably a good thing as we were running late to meet my Dad, thus walked straight to the bowls club instead.

Me and Laura outside the Southampton Walls, near this random boat in the tarmac

The Library and part of the Civic Centre

The Guildhall and other side of the Civic Centre

View on the walls; looking towards West Quays and the Quays 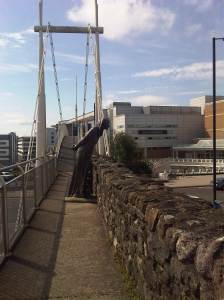 Views on the wall; looking towards the High Street and the Bargate 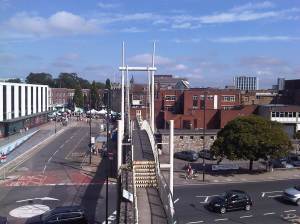 An archway on our wall walk

Inside the bombed church

Me and my Dad weren’t too sure where we should go but we agreed to go to Romsey, which is a tiny market town just outside Southampton, but so close that it almost acts as a suburb of the city. We went to the Abbey, which strangely enough is something me and my Dad had never been to before, so acted like proper tourists too. From there we walked around the town, which really didn’t take too long.

A sign on the wall of the river; a photo which Laura took

From here we drove to the pub and back to the cider drinking. This was Laura’s first full pint as the day before Dad got her just a half in case she didn’t like it. After chatting in the garden of the pub we tried to walk down by the canal which was a disaster as we were both weren’t wearing trousers so the stinging nettles were horrible and the road wasn’t the safest to walk further down.

Instead Dad decided to show us these very cute old churches in the New Forrest. There were 2. The second was near what seemed to be the remains of where a fort might have been. We walked around inside the moat which Laura found very scary. Through how the whole thing she kept saying; “cue man with knife” (even at one point turned to “cue 2 men with 2 knives, a bag and 3 bodies”) and “dum dum dummm”. Probably didn’t help us talking about Midsomer Murders and singing the theme tune. The best part was when Laura was speaking about Jack the Ripper, but called him ‘Jack the Stripper’ instead. Mainly because the Portugese word sounds more like that, but we found it halarious. Then finally went home, before it got too dark and scary.

Laura collapsed on the bed when we got home that evening